The Kiritimati Island Conservation Protected Areas Project is an initiative by the Environment & Conservation Division (ECD) of MELAD through its Wildlife and Conservation unit (WCU) in Kiritimati. The project has started on the 15th September 2020 and will be implemented for a term of 30 months until 15th March 2023.

The objective of the project is to improve the sustainable management of the 9 protected areas on Kiritmati. The three-key priority for actions that the project and its activities will address includes i) enhance the management and governance of priority protected areas on Kiritimati by addressing existing limitations, strengthening on-site infrastructure/equipment for patrolling, poaching control, and developing staff capacities. ii) enforce the legal framework required for effective biodiversity conservation and iii) supporting local community initiatives aiming to enhance the livelihood of the local people whilst effectively contributing to protected areas management.

The implementing office WCU is located in Ronton Kiritimati with the key technical supports and advice provided by the ECD office in Tarawa. The MELAD Administration and the Project office in conjunction with the Accounts unit at the ministry’s headquarters on Tarawa are the focal contacts for the project and play an important implementation role for procurement and compliance to BIOPAMA technical and financial requirements.

The project is financially supported by the European Union and the Organization of African, Caribbean, and Pacific States through the BIOPAMA Programme, with a conditional grant of EU378,617.

The Biodiversity and Protected Areas Management (BIOPAMA) programme is an initiative of the Organization of Africa, Carribean and Pacific States. It is part of the EU Biodiversity for Life Flagship initiative (B4Life) which supports efforts to halt the loss of biodiversity and ecosystem services and is jointly implemented by IUCN (International Union for Conservation of Nature) and JRC (Joint Research center) of the European Commission.

BIOPAMA aims to improve the long-term conservation, sustainable use of natural resources and ecosystem services in African, Caribbean, and Pacific (ACP) countries, in protected and conserved areas, and surrounding communities. Protected and conserved areas and the landscapes within which they are located have indeed a central role to play in preserving the biodiversity and ecosystem services that the majority of rural communities depend on for sustainable livelihoods.

The 9 protected areas in Kiritimati are regulated under the Wildlife Conservation Ordinance CAP 100 and the Environment Act 2012. Kiritimati being an atoll formation is the largest in the world and is a heaven refuge to 19 different seabird species and 3 land bird species. The IUCN has in its Red-list of endangered bird species in the world 3 of Kiritimati bird species namely the white-throated storm petrel, the phoenix petrel, and the Christmas island reed warbler. The 19 different sea bird species known on Kiritimati dominated all the 9 protected areas including their surroundings. Even though the birds' population is healthy there are evidences that these bird species are under combined threat from human-induced activities and importation of potentially invasive species namely Pacific rats (Rattus exculans) and feral house cats (Fellis catus) and more recent the arrival of the black rats(Rattus rattus).

The official names and world database code numbers of the 9 protected areas and including Kiritimati atoll as a whole are listed hereunder;

The names of the 19 sea bird species and including the 3 land bird species that regarded Kiritimati as their home and breeding heaven are listed below; also included are photographs of the 3 bird species (in red font) regarded by the IUCN (International Union for Conservation of Nature) as World endangered bird species; 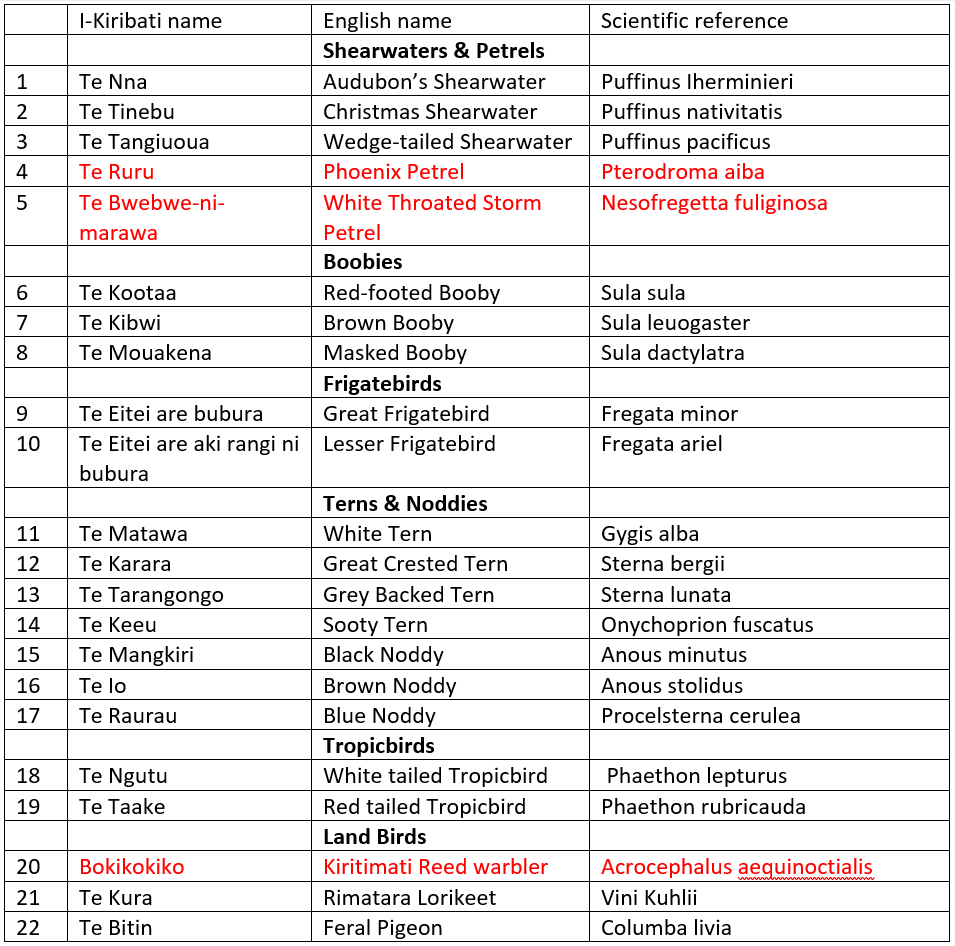