The Environment Enforcement & Compliance Unit (EECU) is an enforcement arm of the Division which deals mainly with the implementation or enforcement of the Kiribati Environment Amendment Act (2007) on the ground.

It  is established with the sole responsibility to safeguard the environment from such negative forces that are legally agenized as destructive to its natural sustainability or health and to police and monitor the entire environment of Kiribati from illegal activities which may contravene the provisions of the Environment Act.

The EECU is manned by only five established so-called Environment Inspectors (EIs).  These are the officers who are empowered under the Environment Act to issue infringement notices and prosecute offenders under the Act.

1. Enforcement and Monitoring
This involves iterative activities triggered by public complaints, arranged patrols to monitor illegal activities such as illegal waste dumping or improper waste disposal, and monitor compliance of proponents or contractors with conditions of an environment licence issued for the project, or Joint-Enforcement with other bodies such as Councils or Police. The EIs based on their enforcement powers under the Act can initiate prosecution of such activities if there is a strong evidence of an offence under the Act.

5. Awareness and training to enhance knowledge and understanding on enforcement procedures
The conscience of general public on protecting the environment depends on how much they know about the importance and role of the environment and how certain practices or introduced wastes could destroy the well being of their own environment.  This requires awareness and intensive training to key stakeholders and pool of communities particularly the young generation who will grow up with the environment conscience.

2. Schedule outer-island visit for enforcement and monitoring
Under this role, Environment Inspectors could arrange outer-island visit to monitor state of environment or monitor compliance of proponents or contractors with conditions of an environment licence issued for the project undertaken on outer islands,  or could be a visit that react to a complaint from the public or any suspected illegal activity that contravene the Act in any islands of Kiribati.

4. Monitoring of Compliance with Environment Licence (EL) conditions
EIU has an important role in ensuring the developer following the issuance of the EL is conforming to the conditions of the EL. This is achieved through a regular monitoring of the activity which includes on-site inspection, reviewing of reports, interviewing of people involved in the activity and those living around the area. 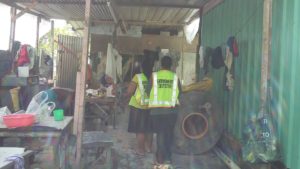 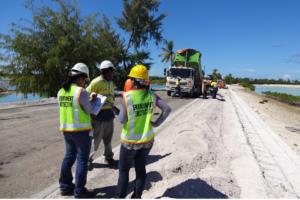